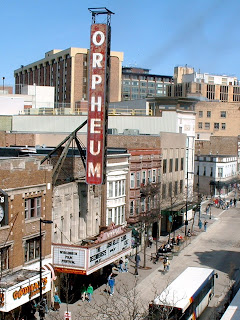 There are all sorts of reasons to love Madison: the University of Wisconsin, wonderful places to eat, independent bookstores, art, the farmers' market, State Street, and the Wisconsin Film Festival. This past weekend my husband and I checked ourselves into a local hotel, donned our walking shoes, and saw seven movies in two days. The annual festival runs four days and shows feature, documentary, and experimental films from independent filmmakers on screens in ten locations. So many movies, so little time!

Unlike the experience of seeing movies at the local multiplex, where chitchat and cellphone conversations are common among the few audience members who have left the comfortable glow of their home TV screens, the audiences here are passionate about movies. Lines for unsold tickets often stretch far down the block, and volunteers remind viewers to move to the center of the rows to help seat everyone. Audience members are friendly, often asking total strangers what they have already seen ("Did you actually get into King Corn? It was sold out...") and what other films they are planning to see. Last year when we saw The Godfather of Green Bay we happened to sit in the center of a group of extras. They'd tap each others shoulders and point when they were on the screen; it was a a riot. Quite often the writers, actors, directors or cinematographers are there to comment on the movies, and to answer questions.

The charm of an enthusiastic audience and the interest of having filmmakers present was illustrated in my favorite movie: It's Happiness: A Polka Documentary. This film, shown in the auditorium of the State Historical Society, was packed. People chuckled, chortled, elbowed each other and hooted out loud. These folks were into polka! At the end the three young filmmakers stood up, as did two of the polka enthusiasts featured in the film. My favorite moment was when one audience member shouted out, "Can you polka?" and the young men danced while the audience sang "Roll out the barrel." You had to be there.
Posted by Sherry Pierce Thurner at 6:29 AM

What a wonderful experience! Keep up the great work Sherry.