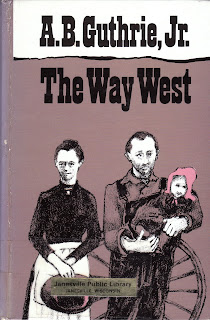 In the few years since I retired from teaching I've gotten deeply involved in researching family history, tracing the movements of an extended set of families as they moved westward from North Carolina to Ohio, Indiana, Iowa and Missouri, to Oregon, Washington and California.  At the same time my husband and I traveled to Washington and Oregon as tourists, and I took time to locate some of the living people from my family tree, and got some sense of where they lived and what their stories involved.  All that made reading this good book, The Way West, even better.  I would have read the book anyway, since I already liked historical fiction, and have enjoyed most of the Pulitzer prize winners I have tried.  But knowing that some of my ancestors came west over pretty much the same route that Guthrie describes here made me all the more interested.

This well-researched novel tells the story of the On-To-Oregon wagon train that left Independence, Missouri in 1845, headed for the head of the Willamette River, the Oregon Territory, where there was free land for homesteading.  There are many characters, so many in fact that if I had it to do over I'd start a list to keep as a book mark. Some of the major characters in Dick Summers, a former mountain man who is hired to guide the group on their way west.  There's Tadlock, an officious and difficult man who is the group's first leader, though he doesn't last - his place is taken by steady Lije Evans. There's Curtis Mack, whose wife is fearful of having a child along the long and difficult journey.  There is a family who choose to leave their Midwestern home because they want a healthier place to raise their young son who is prone to the fevers common in Missouri.  There is a preacher - handy for funerals and weddings.  Some folks are strong, some weak, some honest and forthright, others not. I found the shifting relationships among the leaders and followers to be fascinating, and I was caught up in the groups day-to-day struggles along the trail.  This is neither a cowboy and Indian shoot-em-up novel nor a history text.  Instead it is a heartfelt look at  how real people might have acted and felt during the epic journey along the Oregon Trail.  I also appreciated how much time was devoted to and credit given to the women characters.

I wish I had found this Oregon Trail website before I started reading, because the maps, explanations, and photos would have helped me to visualize the group's journey more clearly.  You can see the site here: The Oregon Trail

I think I saw that a Kindle version of the book, with this website included is available for 99 cents.

Looks like now I need to check out the DVD of How the West Was Won, the Hollywood version of the 1949 book.  The last time I saw it I was a child at the movies.