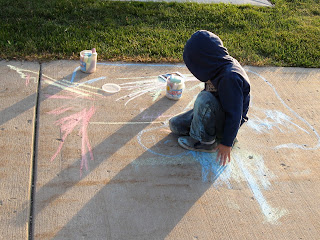 When I was little I didn't know a thing about chalk art, street painting, except when my friends and I took some of our schoolroom chalk outside to put down hopscotch squares.  Never saw it.  Of course I lived on a farm where there wasn't much concrete except in the barn, and that wasn't any place I wanted to get down on my knees.  Living here in Janesville, I see children's chalk drawings on the sidewalks occasionally, but the only professional street painting I've seen has been on the internet.

So - when I learned that Rock County's United Arts Alliance, partnered with the Janesville Convention and Visitors Bureau were hosting an arts festival dubbed the Art Infusion, and they were bringing Wisconsin native street painter Lee Jones to demonstrate and give a free workshop I was excited.

The workshop, held last night at the local PAC, interesting and fun.  Jones is a congenial woman, patient with the uninitiated, and well prepared.  She had spent the work day giving workshops to elementary and high school classes, and now was talking to a small but enthusiastic group of adults. Good note taker that I am after years of being both a student and a teacher, I came prepared with a notebook, but was pleased when she handed out notes on the history of street painting , as well as a list of suggested supplies and tips for creating a successful street painting.  She had lots of personal stories, comments about street painting festivals, and names of other well-known street painters.

The very short version of what she told us is that street painting is an old art, begun in the 1500's in Italy by itinerant artists who were too poor for paint and paper, but would use chalk (pastels) and paint in front of businesses, hoping for painting commissions.  Most of these early street paintings featured biblical scenes  with the Madonna (Virgin Mary), hence the group term for the painters - Madonnaro.
These street paintings are not permanent, they wear and wash away eventually, and only recently have been photographed extensively to make a record.

Of course street art isn't all religious, especially in contemporary times.  Jones told us that artist Kathy Koury from Santa Barbara saw a big street art festival in Grazie Di Curatone, a city in northern Italy, and was so impressed she started a festival in California.  Street paintings appeal has been steadily growing here in the United States, and now we're even trying it here in Rock County.

After her presentation Lee took the group outside to the sidewalk and demonstrated the process, then we had a half hour or so to experiment before it got chilly and the light began to fade. 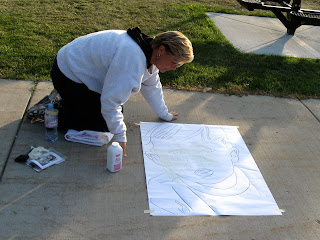 Jones begins by selecting an image, something rather simple and bold.  Here she used a photo of a friend's child. which she enlarged and drew on a large sheet of paper.  Then she uses a transfer wheel, the sort of thing I used to used to transfer a pattern to fabric, making little perforations around the outlines of the drawing.  Then she takes the sheet down on the sidewalk, and shakes talcum power over the whole thing. 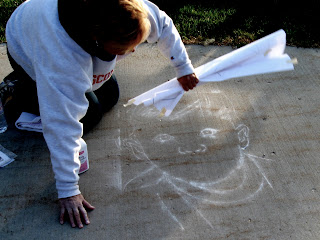 After "pouncing," tapping, the paper, the power goes through to the pavement below, and the paper can be carefully pulled away, revealing the outlines. 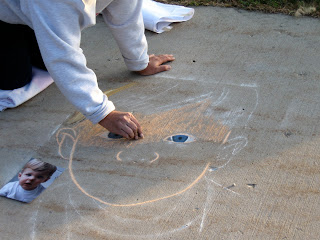 Her next step is to use her pastels to get the outlines down, and from there she adds thing layers of chalk to build up the image, adding highlights and shadows.  She uses things like foam brushes and chalkboard erasers to blend the first layer into the pavement, and after that uses a gloved finger.  It's hard work - hours on her knees, bent over, rubbing.  It's as hard as scrubbing a floor, which is one reason I will be an observer this weekend instead of a participant.  That, plus I don't have anything of the performance artist in me.  I love creating art, but am happiest in my studio.

I hope that lots of artists who have better knees and backs come out to create street art though.  This is something that is great fun.

Interested in seeing more street paintings?  Check out these links:

Thanks for all that information - I had no idea how this started and have never seen it myself (except online). I just watched a program on Diego Rivera and his murals and this tracing and pouncing the lines on are just what his workers did to get his drawing on the walls. OK, now I want to go draw on the driveway! ha ha